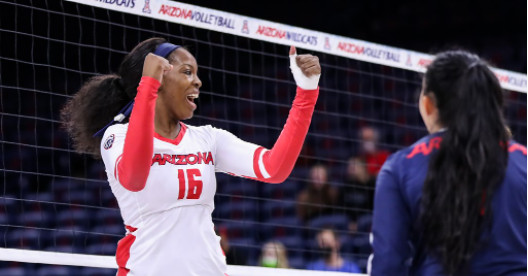 “I thought these guys did a good job on blocking,” the Arizona head coach said David Rubio said. “Even then we had our moments. It really still came down to serving and passing. I thought we didn’t serve hard enough. While we didn’t miss that many serves, we didn’t serve hard enough… and they were in the system too often… It’s frustrating that we couldn’t serve the right people with a little more pace and a little more pace at the Ball.”

Despite the early hour in the middle of a holiday week, over 1450 fans turned out to honor Arizona’s three senior middle blockers Zyonna Fellowsoutsider Dilara Gedikogluand libero Kamaile Hiapo. Though there’s a chance Hiapo could return for her fifth season next year, it was the last home game for Fellows and Gedikoglu.

“I’m very grateful,” Fellows said. “I took a look and I could see the people who have always been at the games since day one. That is amazing to see.”

The result wasn’t what the team had hoped for, but both Fellows and Hiapo had strong games. Fellows had 11 kills, their most against a Pac-12 opponent this season. Her season high was 12 against Maryland. She also had a total of six blocks, including a solo, to give her 14.5 points. The score was the second highest of the team behind Sofia Maldonado Diaz.

“It was amazing,” help Fellows. “We fought hard and just didn’t get the result we wanted. But overall I love my team, so I enjoy every moment that I can play with them.”

Hiapo narrowly missed a double-double with nine assists and 17 digs.

However, it wasn’t just about the seniors. juniors Emery Herman and Maldonado Diaz made their mark on the match with double-doubles.

“Emery is like the straw that stirs the drink for us, and what I love about Emery is that she’s really grown in the last three, four weeks of the season,” Rubio said. “Everything about her has gotten a lot better for me. I’m really proud of her.”

Maldonado Diaz had 15 kills and 11 digs for her double-double. In addition to her kills, she had four aces and four total blocks, giving her a team high of 21 points.

The match was uneven, with the Buffaloes controlling the first and fourth sets while the Wildcats battled with them in the second and third. One of the differences in the middle two sets was how often Rubio chose to bring in an extra defensive specialist while removing one of his pin-hitters. That seemed to help the serve somewhat, but it also meant taking an attacker off the court.

The group has one more outing together when they take on ASU on Saturday at 4:00 p.m. MST in Tempe. What do they need to do to finish the season above .500?