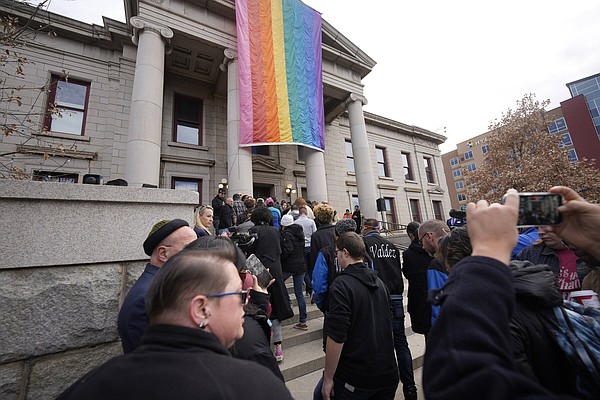 COLORADO SPRINGS, Colorado — A suspect who could face possible hate crime charges in the fatal shooting of five people at a gay nightclub in Colorado Springs was held without bail in a first court appearance on Wednesday.

Anderson Lee Aldrich, 22, was seen slumped in a chair with injuries to the suspect’s face and head visible in a brief video appearance from prison. Aldrich appeared to be prompted by defense attorneys and gave a slurred response when asked by El Paso County Court Judge Charlotte Ankeny to provide a name.

The suspect was beaten into submission by guests during Saturday night’s shooting at Club Q and was discharged from hospital on Tuesday. The motive for the shooting is still under investigation, but authorities said Aldrich faces possible murder and hate crime charges.

Hate crime charges would have to prove that the shooter was motivated by prejudice, such as against the victim’s actual or perceived sexual orientation or gender identity. Prosecutors have not yet filed any formal charges in the case. Aldrich is being represented by Joseph Archambault, a Senior Counsel for the District Attorney. Bureau lawyers do not comment on the cases to the media.

Defense attorneys said late Tuesday that the suspect was non-binary and identified in court documents as “Mx. Aldrich”. The attorneys’ footnotes claim that Aldrich is nonbinary and she/she uses pronouns.

Prosecutor Michael Allen repeatedly referred to the suspect as “he” during a press conference after the hearing and said he didn’t think the suspect’s gender status would change the case. Allen said Aldrich was “physically fit” to face charges.

Aldrich was known as Nicholas Franklin Brink until 2016. Weeks before he turned 16, Aldrich petitioned a Texas court for a name change, court filings show. A name change request was made on Brink’s behalf by Brink’s grandparents, who were the legal guardians at the time.

“The minor wants to protect himself and his future from any connection to his biological father and his criminal history. The father has not had any contact with minors for several years,” reads the petition, which was filed in Bexar County, Texas.

Aldrich’s request for a name change came months after Aldrich was reportedly the target of online bullying. A June 2015 website post attacking a teenager named Nick Brink suggests Aldrich may have been bullied in high school. The post included photos resembling those of the suspect shooting and mocked Brink for his weight, lack of funds and interest in Chinese cartoons.

The name change and bullying were first reported by the Washington Post.

Court documents detailing Aldrich’s arrest were sealed at the request of prosecutors. Aldrich was discharged from the hospital and being held at the El Paso County Jail, police said.