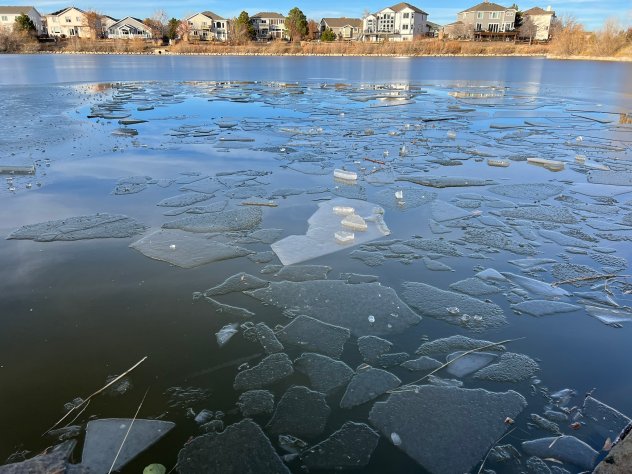 A rescue diving team pulled a boy from an icy Colorado lake and he was flown to a hospital after he and three other children fell through the thin frozen surface Tuesday afternoon, officials said. Neighbors were able to come to the rescue of the three others and bring them to safety with garden hoses, extension cords and other items.

West Metro Fire Rescue in Lakewood, Colorado, said the three children are doing well but the condition of the fourth child, who is described as a young teenager, is not yet known. Ronda Scholting, a fire department spokeswoman, said the boy was taken to the nearest medical center, UCHealth Highlands Ranch Hospital, and then flown to Colorado Children’s Hospital “for further care” Tuesday night.

The first emergency call about the incident was received shortly before 2:30 p.m. on Tuesday, Scholting said.

Kristi Saine, who lives in a lake house, told KUSA-TV in Denver that she and her daughter returned from basketball practice when they were made aware of the children in need. “As we pulled into the driveway and opened the doors, we heard screams. I jumped on the fence and I could see them in the water, all four of them screaming,” she said.

The small group of two girls and two boys ventured onto icy Crystal Lake in Roxborough Park, a Douglas County suburb of Denver, after school, but the ice was too thin to support their weight and they broke through.

Saine and other neighbors, hearing the commotion, quickly grabbed rope, blankets, twine, anything they could find to throw to the children. They managed to pull her out of the freezing water soon after, and the fourth child was found about an hour later, according to authorities.

Saine then took the three youths to his home, where they stripped off their heavy, wet clothes and took a warm shower.

The first three rescued “were closer to shore and [could be] pulled out by neighbors,” the emergency agency said. Authorities noted that the lake is shallow on shore but then “drops off a shelf quickly to 7 to 8 feet.”

Scholting said the kids thought the ice was solid enough to support their weight, but the spot where they fell in was “about an inch thick.”

“On this lake, we know that if we look at the conditions — it recently thawed and then refrozen,” she told AccuWeather.

Scholting warned against going on the ice “no matter what”.

“You never know how thick or strong it is,” Scholting said. “Smaller bodies of water freeze and thaw faster, especially along the Front Range in Colorado. We have a lot of warm days in autumn/winter, so the ice freezes, thaws and freezes all the time, making it unstable.”

In the smaller lakes in the Colorado neighborhood, she explained, “the water is constantly moving, with drainage getting in from the roads surrounding the lake. So even though there’s ice on the surface, the water underneath could be moving – which makes it most likely the ice isn’t stable.”

Although temperatures in the Denver area on Tuesday started just around freezing, they quickly climbed into the 40s by mid-morning and into the low 50s by early afternoon, according to AccuWeather data. The maximum temperature at Roxborough Park was 52 degrees Fahrenheit.

Experts always urge people to know the risks before venturing onto an icy pond or lake, especially knowing that there is no such thing as “100 percent safe ice”. They said frozen bodies of water can be very dangerous unless they are at least 4 inches thick – enough to support an average-sized person on foot. There are also other factors to consider such as the outside temperature over a given period and day, snow cover and the size of the lake.

Do you want the highest level of security without ads? Unlock advanced, hyper-local severe weather alerts when you Subscribe to Premium+ on the AccuWeather app.AccuWeather Alerts™ are prompted by our experienced meteorologists who monitor and analyze dangerous weather hazards 24/7 to keep you and your family safer.