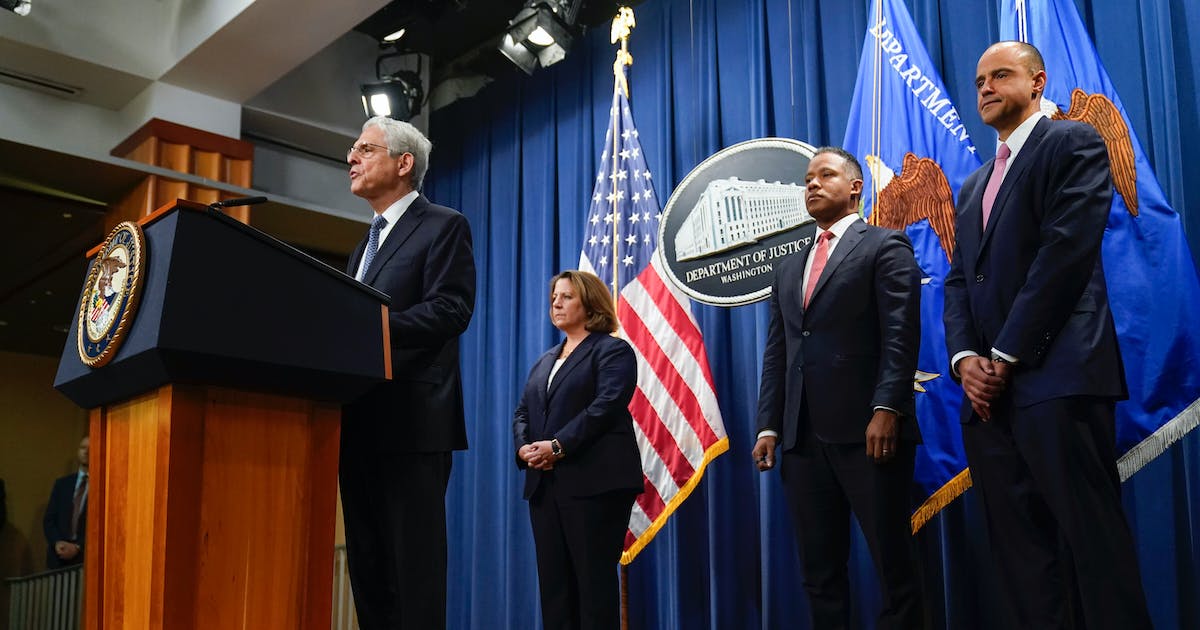 I rise to welcome Attorney General Merrick Garland’s appointment of Jack Smith as special counsel to direct the ongoing Trump investigation (“Special Counsel to Direct Trump Inquiries,” November 19). Smith brings to this arduous task a distinguished track record of legal accomplishments, including overseeing the extraordinarily complex indictments before the International World Court in The Hague to rectify the devastation of war crimes in Kosovo, thereby ensuring the day-to-day security of its citizens. Through this public history, we can see evidence of Smith as a man who embodies both judicial patience and tenacity – a passion for justice sustained by the assurance of resilience, judging by his record, as he consistently delivers justice that is needed brought her due conclusion .

With this appointment, Garland is sending a clear message to the citizens of this country that should not be ignored – that corruption and crime, whether domestic or international, will never be tolerated. Furthermore, alleged wrongdoing is investigated fully and without favor, measured by those age-old lead weights swinging back and forth, tied to that time-honoured scale that jury members testify to in every single American courtroom.

I can think of no more hopeful Thanksgiving message than this one – the sunrise over our mutual blessings, this bounty, the visible fruits of American democracy!

Perhaps the most paradoxical statement in recent memory is Garland’s explanation for the appointment of a special counsel to investigate Donald Trump’s keeping of government documents at his home in Mar-a-Lago and his role in the Jan. 6 Capitol riots. While he tells us he did so to avoid any claim that his Justice Department’s investigations were “politically motivated,” the same sentence in the article reads, “Trump’s announcement … that he will run for president in 2024, coupled with the possibility that President Joe Biden would run as well [Garland] to do what he described as an “extraordinary” move.”

After spending almost two years investigating Trump’s role in the Jan. 6 riots, including numerous public hearings, the House Select Committee has yet to issue a report or announce findings. Similarly, the FBI has been investigating Trump’s possible misuse of government documents for several months. No criminal charges were filed against Trump in any of these investigations. So do we really have to ask Americans what we saw during the Robert Mueller investigation, which lasted two years, cost more than $30 million and resulted in no criminal findings against Trump?

Unless, of course, the purpose of the investigation is to harm Trump’s attempt to return to the White House. While this may be a welcome relief to many, I prefer to achieve this result through the free functioning of our political process, without outside interference from any source. This is politics done right.

Well, our one-of-a-kind near-Supreme Court Justice and current Attorney General showed up at a press conference. Don’t be shocked that, as usual, he comes off in a ridiculous way about the rule of law.

Talking about a “candidate” running for office as if he couldn’t be corrupt, dangerous and a thief is hard to stomach. Imagine Al Capone robbing banks and stealing people’s money, decides to run for office and we have to leave him alone because of “public interest”? Or let a special prosecutor investigate while he travels the country robbing banks!

Well, there have been sitting congressmen charged with corruption, and we survived for the common good. Mr. AG, there seems to be no rule of law these days. We defy Congress, subpoenas, grand jury testimony, etc. What do you do as Attorney General?

As a lifelong Democrat who has supported candidates at every level since Lyndon B. Johnson, I am now considering becoming independent. I can’t keep hearing the same torrent of words – if nothing happens. The “public” knows very well what has happened in the last six years, and it’s not pretty. In fact, there are quite serious allegations: violating the salary clause, stealing secret documents, fomenting riots and rigging elections are just a small selection.

My faith in the justice system is broken today. Therefore, my inclination towards independence grows day by day. Democrats, beware of the “public interest” as it may get in your face.

Everyone in Minnesota, no matter where or how they live, deserves access to quality child care. Childcare is infrastructure – without a safe and reliable place to house children during the day, many adults cannot participate in the labor market. It’s also education – our brains grow to 80% of their adult size in the first few years of life. We must support children and families at this crucial time of development and adequately reward the childcare workers who do this important work.

Minnesota’s child care system needs and deserves public funding. At our center, we spend nearly 90% of our tuition on staff salaries and benefits, so we cannot afford higher wages for our staff without challenging families out of care. That leaves us with fundraising for things like facility repairs and teaching materials. We have incredibly low margins and struggle to maintain affordable and competitive wages.

We must recognize childcare as a public good and support the most vulnerable and powerless members of our community, our children. We’re counting on the new Minnesota Legislature to lead the way. It has the opportunity to achieve universal childcare through full childcare funding, where every family has access to affordable childcare and teachers who earn wages at the level of K-12 educators. It is my greatest hope that we will see action this year. All of our communities will be better for it.

The article “Attorney general: Lunch shaming is not legal under Minnesota law” (November 19) highlighted that 124 Minnesota school districts have policies that appear to violate state law prohibiting shaming of students who engage in the Lunch payments are in arrears. Schools are already being saddled with thousands of dollars in unpaid lunch fees this year and resort to offering needy students “an inferior alternative meal,” embarrassing them in front of their friends. Luckily, Keith Ellison wants to get schools to abide by the law. However, we have to solve the bigger problem that schools don’t have the money to provide lunch and neither do too many parents.

Take the budget surplus and pay for meals for all students. No proof of poverty is required, just feed them all and eliminate the question of who deserves food and who doesn’t. We all know the link between hunger and academic performance. We cannot risk losing more of the learning these children should have but are being lost with the pandemic. To our lawmakers and Gov. Tim Walz: Use some of our surplus dollars and feed our children!

Another day, another mass shooting (“The Colorado Attack Should Set the Storyline,” editorial, Nov. 22). I cannot understand the immense grief that all the families and friends of people who have been injured or killed by gun violence, and not just mass shootings, have endured in recent years. I cannot suggest a solution to this problem that has not already been suggested. We need change at multiple levels to address our fascination with guns, our access to guns, and our issues with gun violence. What I can do is not vote for anyone who doesn’t support gun control. Enough is enough.

Review, outlook of a semester of Texan sports – The Daily Texan