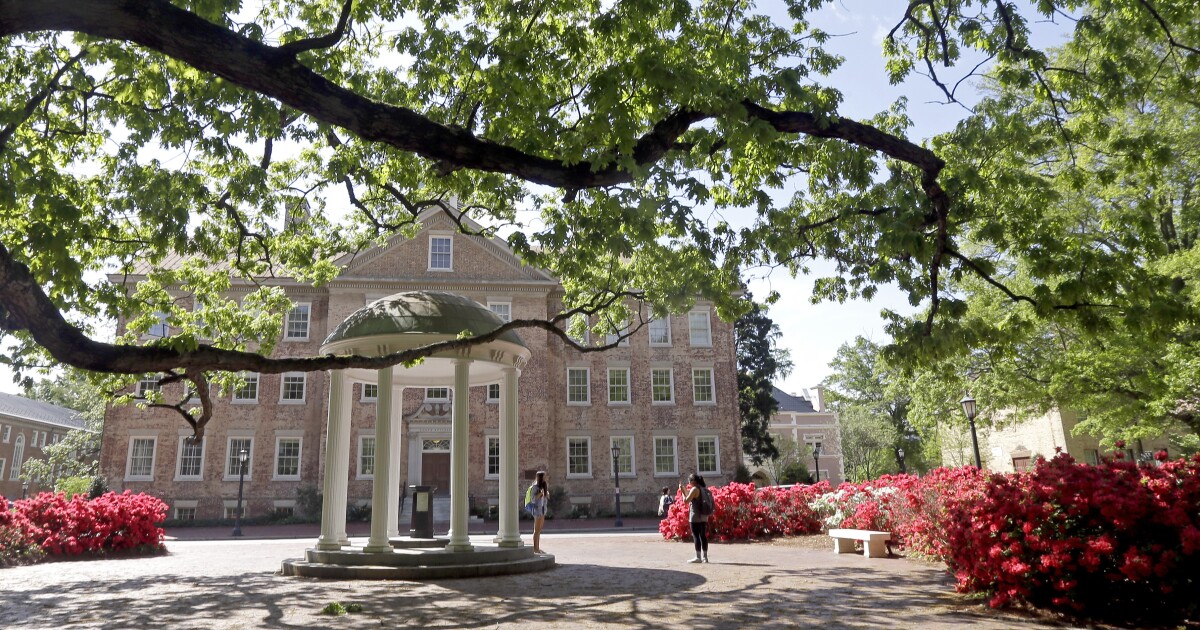 “It is clear that leaders in our state and across the political spectrum take our remarkable university system very seriously and want these institutions to thrive. I appreciate the willingness of these talented and dedicated people to move forward and collaborate under the direction of Chairs Tom Ross and Margaret Spellings on a serious, results-oriented review of college governance, and I look forward to their recommendations for improving the status of college education policies in our great state ‘ said Governor Cooper.

Earlier this month, Governor Cooper signed one supreme command Establishing the Commission Advising on the status of public higher education administration in the state and strategies for successfully positioning the state’s universities and colleges to meet the needs of prospective students.

The governor appointed the following members of the commission:

Margaret Spellings from Texas as Co-Chair. Spellings serves as President and CEO of Texas 2036, a nonpartisan, nonprofit organization developing long-term, data-driven strategies to ensure the prosperity of Texas throughout the state’s bicentennial and beyond. Previously, she was US Secretary of Education and chief domestic policy adviser to the White House under President George W. Bush; President of the George W. Bush Presidential Center; and President Emeritus of the University of North Carolina Systems.

Representative John R. Bell IV of Goldsboro as a member at large. Representative Bell is a native of Mount Olive, North Carolina, and a graduate of the University of North Carolina at Wilmington with a Bachelor of Arts in Criminal Justice and Sociology. He is serving his fifth term representing the citizens of House District 10, which includes Greene, Johnston and Wayne counties. Bell has been Majority Leader of the House of Representatives since August 2016.

W. Louis Bissette, Jr. of Asheville as a member at large. Bissette is an attorney with the law firm of McGuire Wood & Bissette in Asheville, where he served two terms as mayor. He currently serves on the board of trustees of Wake Forest University and UNC Asheville, and is a former member of the Board of Trustees of Western Carolina University and the Board of Governors of the University of North Carolina System, where he served as Chair from 2015 to 2018.

dr Nicole Dobbins of Summerfield as a member at large. Dobbins is an Associate Professor of Special Education in the Department of Educator Preparation at North Carolina A&T State University. Her research addresses equitable and inclusive education strategies with a focus on differentiation through the application of Universal Design for Learning. dr Dobbins currently serves as Vice Chair of the UNC Faculty Assembly and Faculty Senate at NC A&T State University. She is committed to ensuring faculty have a voice in shared governance through advocacy, communication and collaboration.

Rep. John Fraley of Mooresville at large as a member. Former Representative Fraley served in the North Carolina House of Representatives from 2015 to 2020. Fraley is a graduate of UNC-Chapel Hill. He is a current member of the UNC Board of Governors and serves as the board chairman of myFutureNC.

Isaiah Green of Massachusetts as a member at large. Green, a recent graduate of UNC Asheville, is a past student member of the UNC System Board of Governors and past student body president at UNC Asheville. During his time in both of these positions, he worked with university and community leaders to ensure students had a voice and were involved in institutional governance.

Ann Goodnight of Raleigh at large as a member. Goodnight has been committed to children and education for more than 25 years. She is a co-founder and board member of Cary Academy and a trustee of North Carolina State University. She is Chair of the Goodnight Educational Foundation, an active board member of myFutureNC, and a board member of the GSK Foundation. In addition, Mrs. Goodnight serves on the Board of Directors for the YMCA of the Triangle and the NC Science Festival.

dr Clifford A. Jones, Sr. of Charlotte as a member at large. Jones has been the senior pastor of Friendship Missionary Baptist Church in Charlotte since 1982. Jones previously served on the Board of Trustees at Winston-Salem State University.

Gary Locklear of Pembroke as a member at large. Locklear is a retired Superior Court judge. He currently works part-time with the Robeson County Attorney’s Office. Locklear was previously a member of the UNC Pembroke Board of Trustees.

Karen A. Popp of Chapel Hill as a member at large. Popp is a partner at the global law firm Sidley Austin LLP, where she is an international attorney and co-head of her practice group. Popp is the former Chairman of the Board of Trustees and Board of Trustees of UNC Charlotte. She was President of the UNC Law Alumni Association and a founding member of the Higher Education Works Foundation. Popp was the first female student body president in the UNC system. Previously, Popp was a trial attorney for Sullivan & Cromwell in New York City, associate white house counsel to President Clinton, attorney in the Office of Legal Counsel for the US Department of Justice and a federal attorney general in New York City.

Brad Wilson of Raleigh as a member at large. Wilson is CEO Emeritus of Blue Cross Blue Shield of North Carolina. He was a member of the UNC Board of Governors for 16 years and chaired the Board of Governors for four years. A graduate of Appalachian State University, Wake Forest Law School and Duke University, he has served as Executive in Residence at Wake Forest University and NC A&T State University. He also served as an adjunct faculty member at UNC-Chapel Hill.