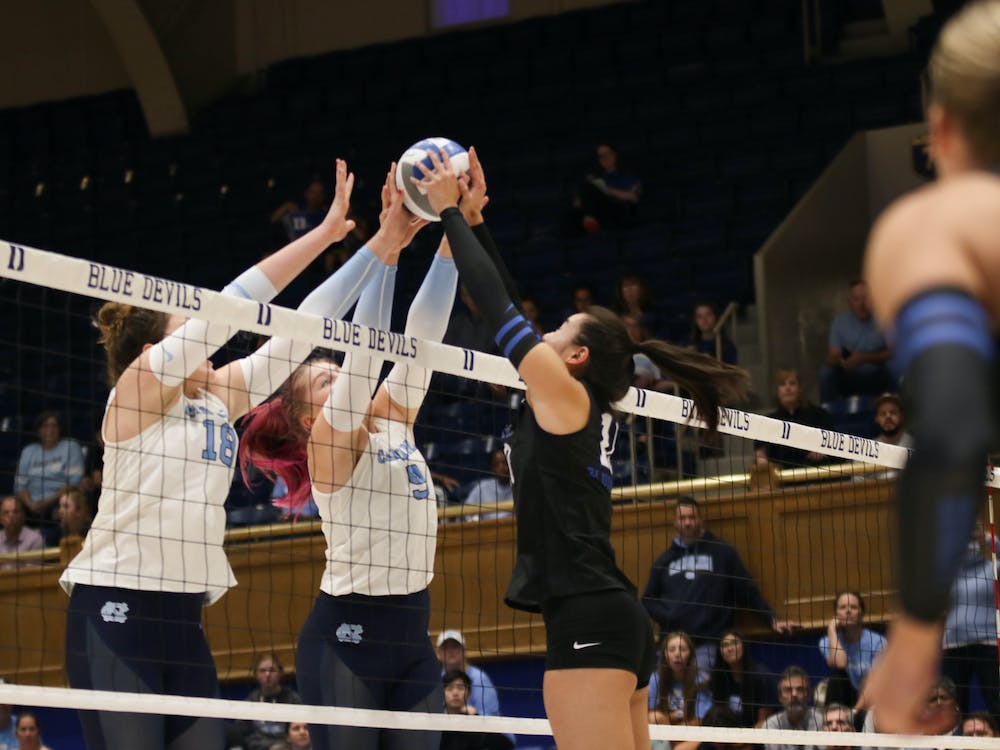 Duke lost the fifth set in his Sunday game against Miami 15-13 – certainly a textbook heartthrob. But it found another stodgy end to its regular season on Wednesday afternoon, this time against an even bigger opponent.

“I think we had to be a little more careful with the ball today to have better chances,” said head coach Jolene Nagel after the game. “But I really liked our effort that we gave and we did some great things too. But I think they served better than us and we had to handle their serve a bit better than us.”

Older underdog Gracie Johnson went into the match second in the ACC with 4.34 kills per set, and North Carolina’s Mabrey Shaffmaster was right behind her, sitting in third place with 3.96. Ultimately, it was Johnson who stole the show at the net with 24 kills – her fifth straight match and 13th of the season with 20 or more kills – while Shaffmaster had 11.

Johnson had a strong presence both at net and back for Duke (16-13, 7-11 in ACC) and gave the Blue Devils a 15-9 lead in the second set by using a Tar Heel defender for protection forced her face off an oncoming swing. Her most effective finishes were cross-court swings that forced a timeout in the following game after she found the sideline in front of a pancake saved from graduate setter Devon Chang. Despite getting off to a slow start, swinging out of the back row twice, she quickly found her consistency and even pulled off four straight kills as Duke pulled off a 7-0 run in the decider.

“She’s definitely been just huge for us offensively this year,” Nagel said of Johnson, “and a leader, not just on her offense but because she’s been on the court all the time. … She came in and has worked diligently since day one to be the best she can be and continue to develop as an athlete and it’s just so much fun to see her shine out there on the court and stuff dominant as she has been this year because she certainly worked very hard for it.”

Shaffmaster’s greatest threat on offense was her vision on the court, sometimes taking her power back and instead catching Duke’s defense on their heels by putting the ball into holes in the court. After approaching the antenna and aligning her shoulders with the line, causing Duke to shift in preparation for a hard line shot, Shaffmaster batted the ball across the court in front of the 10-foot line, the ball being Duke’s Player hitting the ground couldn’t reverse direction in time.

“I think her biggest challenge for us today was her serve. She has a really good topspin jump serve,” Nagel said of Shaffmaster hitting five aces. “…And she’s a physically strong kid, but she’s also pretty smart. Our defense definitely didn’t have to get too involved with her because she can move the ball; She sees the pitch and can move the ball so well.”

The Tar Heels (16-12, 8-9) had a heavy blocking presence, led by middle hitters Kaya Merkler and Skyy Howard, and even held Johnson without a kill from 16-9 in the second set to 18-12 in the third. But they were able to limit Duke’s offense, especially behind the service line. With 11 aces, North Carolina’s power behind the line often forced the Blue Devils to send passes over the net that wingers like Parker Austin quickly returned to a stunned Duke defense, or to play off the system.

Duke coped well with out-of-system games earlier in the season but struggled on Wednesday at Chapel Hill. The Blue Devils sometimes opted to roll balls towards the middle of the court, which North Carolina eventually seemed to predict and easily pick up, and sometimes they just hit the hands of the Tar Heel block, timed by a high jab, Dukes Thugs locate sets from scrappy passes.

Wednesday marked the 125th meeting between the two rival programs, with North Carolina leading the series 68-57 and winning nine of the last 10 meetings. The result marked the 864th win for North Carolina head coach Joe Sagula, who has the third-most wins of any active Division I coach, behind only Mary Wise of Florida and Florida State’s Chris Poole.

Get The Chronicle straight to your inbox

Sign up for our weekly newsletter. Cancellable at any time.

Leah Boyd is a Pratt Senior and Social Media Chair of Volume 118 of The Chronicle. She was previously the editor-in-chief of Volume 117.

Odds, tips and predictions for New Mexico and the state of Colorado