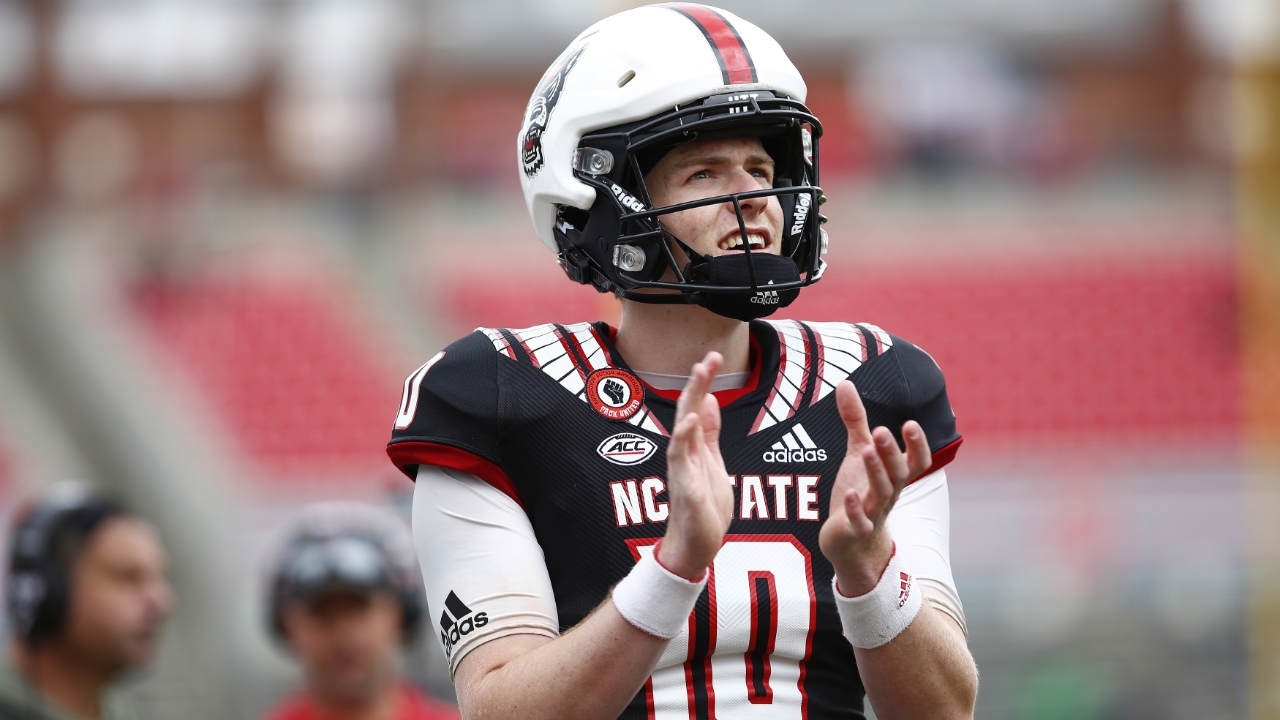 NC State quarterback Ben Finley met with the media to discuss his game and rivalry against North Carolina.

A NOTICE: Click on the video above to watch the interview.

Have you talked to your brother since the Louisville game?
Yes, I have. I’m trying to get him to fly up for this one, but hopefully he’ll be there. Celebrate Thanksgiving with him and then we’ll celebrate a win.

What is he doing right now?
He’s in Arizona right now with his girlfriend and dog. And they just chill.

How is your wellbeing this week, say, compared to last week? Last week you didn’t know exactly what was going to happen in Louisville. Now you know you might play a lot in North Carolina. How is the comfort?
I think the last week has been great just building some comfort in the bag and just learning from some of those things in the film. And I think I’ll feel a lot more comfortable there now. We only play with what we have and I think the best I can give is the best I can do. I’ll just go out there and do my best when my name is called. And otherwise, yes, just be comfortable.

Do you even remember that spring when it was just you and Devin and things you were able to learn or pick up on back then?
Even without Devin he was a tremendous help, he just helped me through that process and really just helped all the quarterbacks. And so, yeah, I just go back to when I was training with the squad in the spring and it’s the same stuff. It still works, just perfecting the craft. But yes, I mean, Devin has been a huge help to all of us in the room.

Was there a soul searching after August when, I mean basically, being relegated to the scout team, I’m sure that wasn’t the easiest thing to hear, but what pulled you through there?
At the end of the day I just love my team and I love these guys so much. So I was willing to do anything to help us win. And I think in the first eight to nine weeks, when I was done with the scout team, I think we helped prepare them really well.

We even brought in people from the scout team. I mean, it was great to see wide receivers bumped to starting two depth from my perspective. And that was really cool for me to experience and then my time came and now I’m ready.

I don’t know if it was just a rumour. Do you have a dream of becoming a lawyer one day?
My sister just graduated from Arizona State University Law School, so I’m thinking about just taking the LSAT for a giggle and then maybe studying for it and taking a class. But when it does, I really don’t know what to do with my life. I really don’t.

Back in September, did you think you’d be standing here and speaking to the media the week of the game against North Carolina?
Absolutely not. no We played four quarterbacks. I don’t think any team can imagine that earlier in the season.

Going back and watching the Louisville game video, how would you rate yourself in terms of decision making and all the things that go with it?
I think there were definitely some things I could have done better, but I think I just went out there and just let it fly. I just wanted to go out there, pick a guy and let him fly. Just simplify the game, go out, have fun.

I think it was important that I didn’t think too much and just go out there and do my thing. So I’ll try to catch up. But I definitely need to fix some things in terms of progressions and maybe get to my next few readings, not hang out with the first guy. But that just comes with comfort and I think it helped a lot playing in this game.

You lost the game. did you have any fun at all
I always enjoy playing football. sport I love.

By the way, how long did you work on the mustache? Is this a one year thing?
Oh, I haven’t shaved in 20 years. I just started getting facial hair. I think I’m hitting puberty. Yes.

What do you remember when you were on the field that day when you played them over there?
I remember being surprised…it was really quiet for me and I think before the game, the bus ride over, I was nervous as hell but then I got on the field and it was just, everything slowed down and stopped and it was kind of a surreal moment and it was so fast.

But now the game was slowly getting slower. The rivalry on the field… it’s just football. Nobody talks, boys talk crap. But at the end of the day we’re just kids playing a game and all you can do is have fun and go out and compete and try to win.

Usually it’s a difficult adjustment for the speed of the game. But when you go up against NC State’s first string defense, was that a little bit easier against Louisville because you saw the speed of the game?
Well, scout team, you’re not trying to hurt anyone, but it’s still probably 70, 80%. But I remember the first game handed to Jordo just looked like the linebacker was just going to get into a crush. I was like, “Wow, that’s real.” And after that, I kind of calmed down.