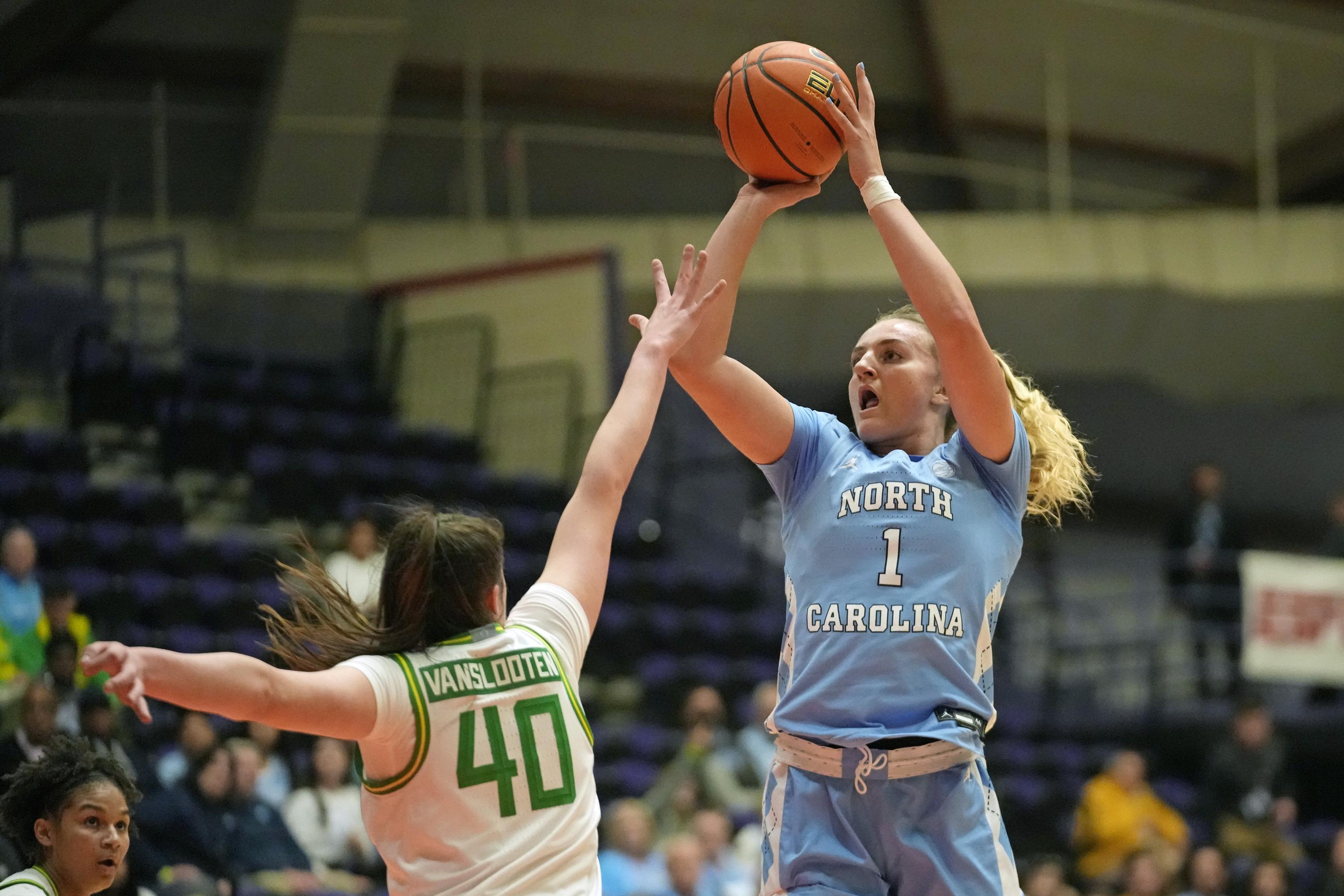 PORTLAND, Ore. (AP) — Even though it was played a few hours north of campus, it felt like a home game for No. 18 Oregon with the tournament’s namesake and a former National Player of the Year sitting courtside.

North Carolina coach Courtney Banghart’s reaction to her team was all the more impressive.

Eva Hodgson scored 14 of her 21 points during a fourth-quarter shootout, and No. 8 North Carolina rallied multiple times in the second half to defeat Oregon 85-79 in the semifinals of Thursday’s Phil Knight Invitational. The Tar Heels meet on Sunday in the championship game against the No. 5 from the state of Iowa.

“We didn’t come out with that sense of urgency, which I think they really need to understand, that their success and ranking warrants it,” Banghart said. “And then when things weren’t going so well, they totally stay in what we need to change.”

Part of those changes included Hodgson not hesitating when she got clear looks in the fourth quarter. Hodgson scored 10 points within 90 seconds in the fourth quarter after it looked like the Ducks were about to retire. Hodgson’s four-point game with 5-12 remaining gave North Carolina a 72-68 lead. Oregon drew within 74-73, but Hodgson hit four free throws down the stretch that looped around Destiny Adams’ basket and the Tar Heels were able to hold on.

“My coach and my teammates have been telling me for a year and a half that I’m here just to shoot the ball and make it fly,” Hodgson said. “Because I had their faith in me, towards the end of the game I knew we needed something to change the course of the game in some way.”

Te-Hina Paopao led Oregon (4-1) with 18 points, Grace VanSlooten added 17 points and 11 rebounds, and Jennah Isai scored 15 points. But the Ducks will bemoan the odds they had to put the game down, leading by 11 in the opening moments of the second half and taking a 66-58 lead with 7:34 after the start of the fourth quarter with an 11-2 lead run.

That’s when Hodgson got hot on the edge. Their consecutive 3 points halted Oregon’s run and their four-point game gave the Tar Heels the ultimate lead.

“I’m disappointed we lost, but now I’m more encouraged than I would have been when I came into the game,” said Oregon coach Kelly Graves. “I didn’t know exactly what to expect with this group because we’re so young and haven’t been tested yet. For the most part we played a really good game and did a lot of really good things.”

Nike founder Knight sat alongside former Oregon star Sabrina Ionescu for the matchup courtside. Also in the stands was Roy Williams, former North Carolina men’s coach, who was in the other city early Thursday for the Tar Heels vs. Portland men’s tournament matchup.

North Carolina: The Tar Heels started the week with the highest placement since the 2014-15 season when they climbed to No. 6 in the AP Top 25. The win over Oregon was North Carolina’s 20th straight non-conference win.