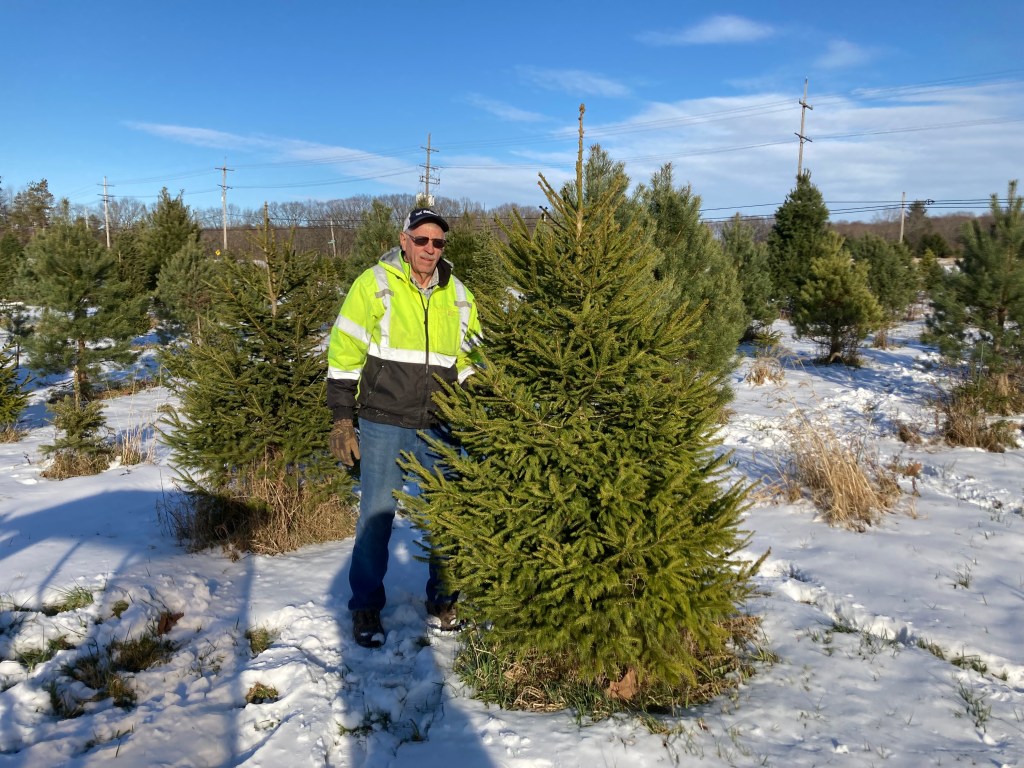 North Corner Farm in Burton Township began more than three decades of raising and selling Christmas trees as a way for a family to contribute to their children’s tuition.

“It just grew from there,” says John Wolfram, who runs the farm with his wife, Mary Lou, and their family members.

He noted that the Wolframs have been planting trees in North Corner, named for its location at the corner of Butternut and Claridon-Troy streets, since about 1988. In the 34 years since then, the family-run farm has grown several varieties of Christmas trees on what is now approximately 3 hectares of land.

“We are the third generation to grow Christmas trees,” says Wolfram, who grew up on the property. “We have customers who came here for a Christmas tree when they were first married and had young children, and now their children are coming, so we see repeat customers coming every year.”

According to Wolfram, tree species grown at North Corner include Scots pine, white pine, Norway spruce, blue spruce, and firs such as Canaan fir. The farm also imports Fraser Fir from North Carolina, which is one of the trees that line the property overlooking Butternut Road.

“It takes about seven to 10 years for them to fully mature,” he said, and then they’re ready for sale.

Wolfram also noted that growing Christmas trees has a positive impact on the environment as they stay green and produce oxygen all year round.

After North Corner felled and sold trees for the season, he said growers are taking the seeds to plant in the spring. The rest of the year they mow the grass and take care of the trees.

“In early summer, June-July, we have to cut the trees,” Wolfram said. “Especially the pines need to be cut at a certain time when they get fresh growth on their branches, so you cut them with clippers and garden shears and so on.”

As the holiday season approaches, he said North Corner will be making Christmas decorations such as garlands and wreaths. Kindergarten children will come for farm tours while farm staff drive potential clients into the fields to look at trees.

North Corner uses a “choose and cut” model, Wolfram explained, where customers can choose a tree and someone from the farm will cut it down for them. Then the tree is baled and placed in a net, and farm workers help customers load the trees onto their vehicles.

Hot chocolate and homemade cookies are also available for customers, he noted.

Wolfram explained that he enjoys seeing old and new customers the most, saying: “A lot of our customers are like family. We get to see them every year when they come for a tree and that’s part of the fun of seeing people take home a freshly felled tree and then have a happy Christmas.”

Mary Lou added that she enjoys “seeing the younger kids so excited to go out and find a tree.”

In addition to selling Christmas trees during the holiday season, North Corner Farm also sells produce during the summer. Visit the farm’s website at northcornerfarm.com for more information.

According to Mary Lou, the farm will sell Christmas trees from November 25 to December 22 on Fridays, Saturdays and Sundays from 10 a.m. to 5 p.m. Visitors can be visited Mondays to Thursdays by appointment.

“It’s kind of a tradition that people get real trees, as opposed to the ones that take a lot of oil to build, the fake trees,” Wolfram said. “The other benefit of real trees is that they’re all natural, and who doesn’t love a freshly cut Christmas tree and the aroma it gives off?”