A third bus carrying Texas immigrants arrives in Philadelphia, with a fourth just behind 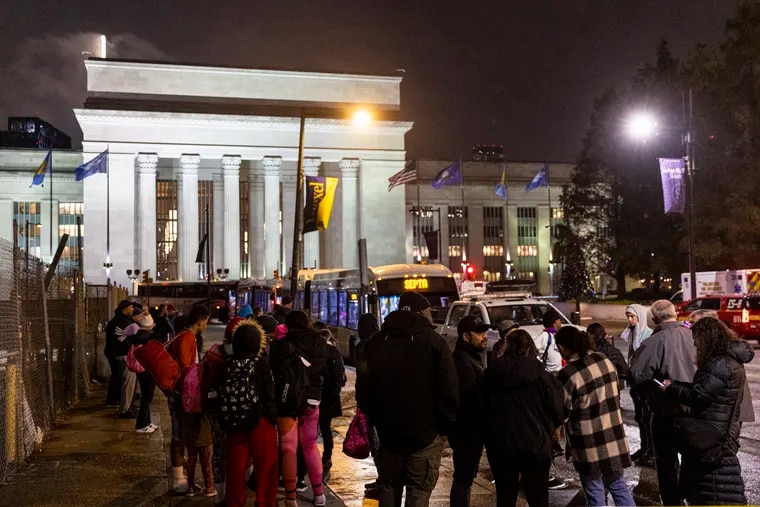 A third bus carrying immigrants from Texas rolled into Philadelphia early Friday morning, with a fourth said to be close behind. The new arrivals the day after Thanksgiving proved to be a test of how quickly and effectively the city could host another welcome.

On the first bus, which arrived at the 30th Street station just after 6 a.m., were two children. A total of about 81 passengers were expected.

City officials and immigrant guides worked to smoothly get the first arrivals onto a SEPTA bus and then drive them to a city-operated welcome center in North Philadelphia.

In the past 10 days, four buses carrying about 150 people have landed in front of the 30th Street station, being dispatched here, local officials and leaders said, by Texas Gov. Greg Abbott.

The governor describes the buses as an attempt to ease pressure on Texas border communities, while Mayor Kenney and others say it’s a cheap political ploy against immigrant families.

All who have been sent to Philadelphia are permitted to reside in the United States, at least while pursuing their claims in federal immigration court. All or almost all are seeking asylum, a legal way of staying in the country, for those who are being persecuted in their home countries.

Abbott boasts that it has sent more than 13,000 immigrants to New York, Chicago, Washington, DC and, as of this month, Philadelphia.

Philadelphia immigration advocates and local government officials say they are confident in their ability to cope with ongoing and more frequent drop-offs.

» READ MORE: This is how asylum works

City workers, pro-immigrant advocates and volunteers quickly screened the arrivals in the cool Friday morning darkness. In a new routine, immigrants were screened for medical emergencies, offered blankets and coats, and then placed on a warm SEPTA bus. Those who were not picked up by family members outside the station went to the reception center in North Philadelphia.

Most of those who have arrived since November 16 have left Philadelphia to connect with family in other states. They originally came to the United States from countries such as Colombia, the Dominican Republic, Panama, and Cuba.

Immigrants interviewed by The Inquirer said their two-day trip began with an offer of a free trip to Chicago, New York or Philadelphia, made over a loudspeaker at a border facility in Del Rio, Texas.

» READ MORE: He was offered a choice of three cities in Texas. How an immigrant landed on a bus bound for Philadelphia.

Philadelphia’s Office of Immigrant Affairs and Office of Emergency Management have been preparing for these arrivals since the summer, coordinating with community organizations like Juntos, HIAS Pennsylvania, the Pennsylvania Immigration and Citizenship Coalition, and the Nationalities Service Center.

From the first bus stop, the attorneys and the city have provided immediate logistical support, helped immigrants connect with relatives, and connected those staying in Philadelphia with legal services and housing. They say they will seek state and federal help to support the operation.

This is an evolving story and will be updated.