Texas A&M too much to overcome 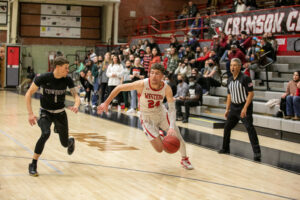 The Mountaineers went head-to-head in a game last season.

The Dust Devils got off to a hot start and took a 14-4 lead five minutes into the game. That lead didn’t last long as Jonathan McCloud knocked down back-to-back threes. his push sparked a 12-2 run that tied the game at 16 points apiece. After a brief exchange of points, Texas A&M’s offensive got going again.

Kevin Jimenez was down 25-18 before half-time with 5-41 left and sinking two free throws while Jonathan McCloud knocked down a 3-pointer and cut the lead to three points. Minutes later, the Dust Devils extended their lead to seven points.

But again, two free throws from Avery Rembao and a jump from Jonathan McCloud put the Mountaineers back three points ahead. Before the end of the half, Texas A&M threw down three free throws to maintain a six-point lead at halftime.

The Mountaineers kept fighting, cutting the Dust Devils’ lead to five points at the 13:23 mark of the game after a layup by Grant Wilkinson and a three-pointer by Jaelan McCloud. From there, Texas A&M managed to stay well ahead of the Mountaineers and eventually secured a 74-60 win.

The Mountaineers started strong against Texas A&M Kingsville. But midway through the first half, the Javelinas’ offense picked up speed and continued to build momentum as the game progressed.

The Mountaineers started with a 7-2 run after a three by Jaelan McCloud, a layup by Kade Juelfs and a dunk by Robel Desta. Texas A&M reacted quickly, beating Western 8-7 in the next three minutes.

With 6:06 left in the first half, Texas A&M put together a string of successful runs. By the end of the first chapter the scoreboard was 34-22 for the Javelinas.

Texas A&M offense and defense came from halftime and were ready to go, fueling a 15-4 run that lasted just over six minutes. Down 49-26, Western fought on.

Jaelan McCloud knocked down a jumper, Trevin Lieck hit two free throws and Mason Black made a layup and cut the lead to 49-32. That was the next point where the Mountaineers took the lead for the rest of the game.

Western Colorado will play at home for the first time this season on Friday, November 25, taking on Simon Fraser at the Inn at Tomichi Thanksgiving Classic. On Saturday, November 26, the Mountaineers take on Northern New Mexico. Both competitions are scheduled for 3 p.m